Alternatives for Google Reader to Keep Tabs on RSS Feeds

You are here: Home / News / Alternatives for Google Reader to Keep Tabs on RSS Feeds


Along with the BlackBerry Google Voice app, Google Building Maker, Snapseed Desktop, Google Cloud Connect, and others, Google Reader is being swept away (assuming the various petitions – 1, 2, and 3 – in place don’t stop it) in Google’s spring clean up.

“Google Reader will not be available after July 1, 2013” says the popup message when jumping into Google reader today (March 15th).

According to the blog post, published on the 13th of March:

“We launched Google Reader in 2005 in an effort to make it easy for people to discover and keep tabs on their favorite websites. While the product has a loyal following, over the years usage has declined. So, on July 1, 2013, we will retire Google Reader. Users and developers interested in RSS alternatives can export their data, including their subscriptions, with Google Takeout over the course of the next four months.”

What is the value of an RSS reader anyway?

Now, rather than visiting the site every day, you want a simple way of knowing when new content is published.

There are a few ways to do that. Email alerts can be setup (often based on feeds, incidentally, if they are done in an automated way), but a popular way is to pull the feed into a personal reader.

The “feed” is automatically updated, or even “dynamically” updated when referenced. Either way, as new content is added to the site, the category, the search results, the whatever, subscribers of the feed can see the content in their reader.

Google Reader was a great way to pull several feeds together and categorize them and mash them up any way that you see fit.

It’s just convenient really, and the layout is typical and user friendly.

What’s a feed junkie to do?

Now with Google Reader gone, how can a person keep track of their feeds?

Well, to answer that it really depends on what the feeds were used for in the first place.

A journalist or web site owner, for example, may aggregate a bunch of content in a particular niche, say… “Internet News,” so that they can report on the news and write articles based on it.

Well, in that case, following specific companies in the industry on Twitter and Google Plus can keep the journalist abreast on the latest news. Creating Twitter lists and Google+ circles helps “categorize” the content.

Also, Facebook is another way to keep track of “news” in a given industry. While there might be other, and newer ways to categorize content, one way is to create a Facebook Page to post your own “news” to for a specific niche.

Then, “like” all the companies and sites you wish to follow, and the news feed, when using Facebook as that page will be specific to those “likes,” in what is hopefully a particular niche. So, in this case, each Facebook page created can be the start of a “category” to be used in the same way that lists are used in Twitter, and circles are used in Google+.

However, with the new categorizable news feed being rolled out in Facebook there may be simpler ways to keep tabs on specific industries in an organized way.

There are plenty of RSS readers that exist across the web, many that are free, some that you must pay for. A lot are web based (i.e. in the cloud and accessible from multiple devices), and some are downloadable software, and some will sync with local and cloud content.

1) The Old Reader – This reader, dubbed “the ultimate social RSS reader,” was built after the re-design of Google Reader in order to bring back features that many have missed from the previous Google version.

2) NetVibes – The NetVibes reader is a cloud-based, or web-based reader with many features similar to that of Google Reader. It offers an iGoogle-like homepage, plus a Google Reader-like UI.

3) Flipboard – Flipboard is a different way to “subscribe” to the web. It is an app for handheld devices that let users subscribe to a variety of feeds and “flip” through pages of content in a graphical magazine-like format.

4) FeedReader – FeedReader is a downloadable solution for Windows and Linux users, plus there is a browser-based, so therefore OS-irrelevant, version as well.

5) Feedly – Feedly is a popular web-based choice with multi-device and multi-browser support. Plus, if you liked the “star” or “save for later” feature of Google Reader, that feature exists here as well, as many a good reader should.

6) Digg – Digg announced that they have a reader in the works that is to mimic Google Reader in some ways, and advance on it in others.

“We hope to identify and rebuild the best of Google Reader’s features,” they wrote, “but also advance them to fit the Internet of 2013.”

This topic is important whether you are a Google Reader user currently or not. If you have a web site with a feed, whether you made that feed easily discoverable or not, people are probably subscribed to it using Google Reader. 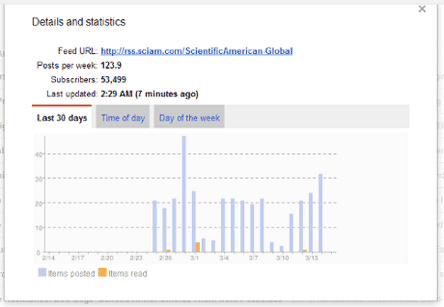 To verify that, open Google Reader, then subscribe to your own feed. Hover over your feed in the list in the left column, and click the down arrow that shows up to the right.

Choose the “View details and statistics” option and check the “Subscribers” value. That number reflects how many people you stand to lose as subscribers if they didn’t “get the memo.”

Well, even if they did, it might be wise to explain how to move to a new system and offer a step by step procedure for doing so.

If you like, you can just link them to this post, then inlcude a #movefromgooglereader at the end of the URL, and they can follow along with the steps below.

While The Old Reader could benefit from a new name (arguably), it may just be the simplest move from Google Reader. It’s a free, full featured, social RSS reader, which trutfully can be looked at as an upgrade from Google Reader if you consider the “social feature removal” that Google made in the past.

Step 1) Go to The Old Reader web site – The first step is to head over to theoldreader.com. 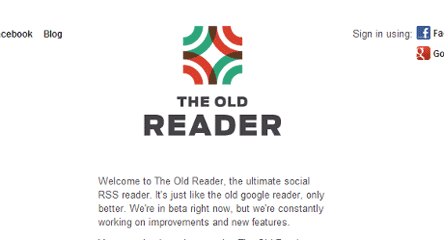 Step 2) Login to the reader interface – The next step is to choose which method to login, whether it be Facebook or Google+. My personal choice is Facebook. While not everyone has a Facebook account, even less people have a Google+ account even if they do use Google Reader, so I will follow along here using the Facebook login method.

Click “Facebook” at the top right of the screen. Choose your level of privacy. If you really want to use the social aspects of the reader then keep it set as “Friends” or change it to “Public,” otherwise choose “Only Me,” and click “Go to App.” 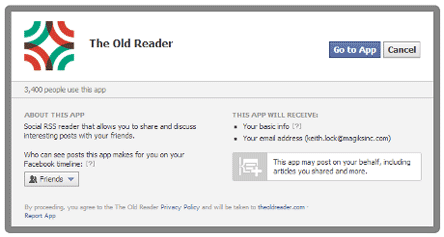 You should then be redirected to the reader interface and be presented with a message that says:

Step 3) Export feeds from Google Reader – Perhaps this should have been the first step but if you use the link provided it will open in a new tab. Head over to Google Takeout and login using your Reader account credentials. Your archive options will show just “Google Reader.”

From there click “Create Archive” where you will be redirected to the “Download” section to watch the progress of the export. Now, download the file to your computer.

Note: Many people are attempting to use the Google Takeout feature for Google Reader exporting right now, and for some it is not working.

Step 4) Import feeds – Now it’s time to import your feeds from the old reader into The Old Reader, err, I mean the new reader 😉

Depending which method you choose in the previous step, you might have ended up with a zip file or a single XML file. The zip file will contain extra data that can be used elsewhere, but for this import we will be working with just the basic Subscription XML file (which was downloaded from either method).

The Pac-Man like progress indicator will chomp away while it uploads your data to the queue. Your feed will be processed in turn and “might take up to several hours.”

While losing Google Reader to some may seem like an unfortunate thing, perhaps there is a bright side. It may provide the opportunity to try new software that you might not have known existed. This software may contain new features that could be beneficial to your business.

Perhaps new sites and resources were discovered because of this change. All in all, sometimes it’s just nice to start anew.

I personally have discovered ways that others have used RSS readers that gives them ideas for new content. I added two new sites to my new reader that have valuable content. I’m trying an alternative way to subscribe to content by using Flipboard, and I was able to share this post.