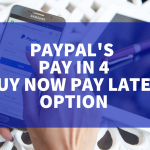 It is no surprise after the success of Afterpay; the leading company in the 'Buy Now, Pay Later' battle, that PayPal has followed suit with their very own version known as 'Pay in 4'. Similar to many of the other pay later platforms such as ZipPay, Sezzle, Quadpay, LayBuy, and Latitude Pay; 'Pay in … END_OF_DOCUMENT_TOKEN_TO_BE_REPLACED